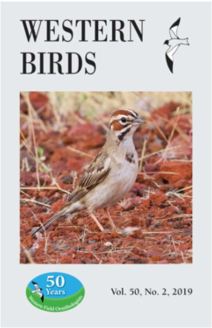 We made the cover!

A new paper that I was involved with was just published in the journal Western Birds, titled “The structure of Lark Sparrow song in California”.  The paper was a collaborative effort with Ed Pandolfino. This was a rather out-of-the-blue collaboration – Ed and I had emailed back and forth about Plumbeous/Cassin’s Vireo song a few times. Then, as he started examining Lark Sparrow song, he figured my analytical skill set would be useful as he started writing a paper on that species. I happily obliged, things went smoothly thereafter, and now the paper’s out! Click here to have a look at the paper or read on for a brief summary.

The study describes the song of Lark Sparrow, with a particular focus on the sequential organization of the song. To summarize, this species seems to have four levels to its song hierarchy, which we termed elements, syllables, strophes and themes. Elements are simple, single traces on a spectrogram – often tones or buzzes. We assigned each element type in a bird’s repertoire a letter (e.g. element C). Elements are strung together via variable numbers of repetitions to form syllables, which we assigned a letter-number combination (e.g. C5 is five repetitions of element C). Several syllables comprise a strophe (e.g. strophe A1-C5-G2-E3-F1), and strophes are separated by each other by several seconds.

We observed that consecutive strophes were often similar, made up of a similar set of elements, but differing in composition, number of repetitions of elements, or order of syllables. But here’s where it gets interesting: if you record a bird long enough, they eventually switch to an entirely different “theme”. A theme, by our definition, is an entirely different set of elements/syllables used to compose song. Once the switch has occurred, the bird tends to remain on that theme for a while. Have a look at this figure for a visual representation:

A network representation of Lark Sparrow song. Syllables comprised of the same element are collapsed here for clarity (e.g. L3 and L4 are shown in the same node of the network). When a bird starts a song, it decides on a theme to sing (1 or 2, here). The entire strophe will be comprised of elements from that theme, with very few exceptions (note the lack of arrows between the two themes, but incredibly complex sequences within each theme). Eventually, after several repeats on that theme, the bird abruptly switches to another theme.

From my new-found familiarity with this species, I’ve come to see the Lark Sparrow as a wonderful example of song complexity, and specifically the hierarchical structure of bird song.

Some questions remain unanswered from our research. Foremost in my mind is the question of how many themes each bird possesses. We were limited by not having a colour-banded population of birds, so it would be difficult to confidently ID birds if recorded on different days. Consequently, we had relatively short recordings of each bird. Still, we observed up to 3 themes per bird. Would more appear with longer recordings? We also observed some birds to have only one theme. Was this an artefact of low sample sizes? And then there’s the ever-present question of why these birds have such complexity in their songs. Does it have consequences for reproductive success?

All interesting questions, and ones that would reward further study on this fascinating species.